Home » Blog » A Day Out With UOW FSAE

A Day Out With UOW FSAE

Late last month we headed out to Sydney Motorsport Park with UOW FSAE, the University of Wollongong’s resident Formula SAE team, for what they promised would be an action-packed day. We would be test driving their car, Lucy, which helped propel the team to P8 at Formula SAE Australasia 2015, the top placing New South Wales-based team for the year. 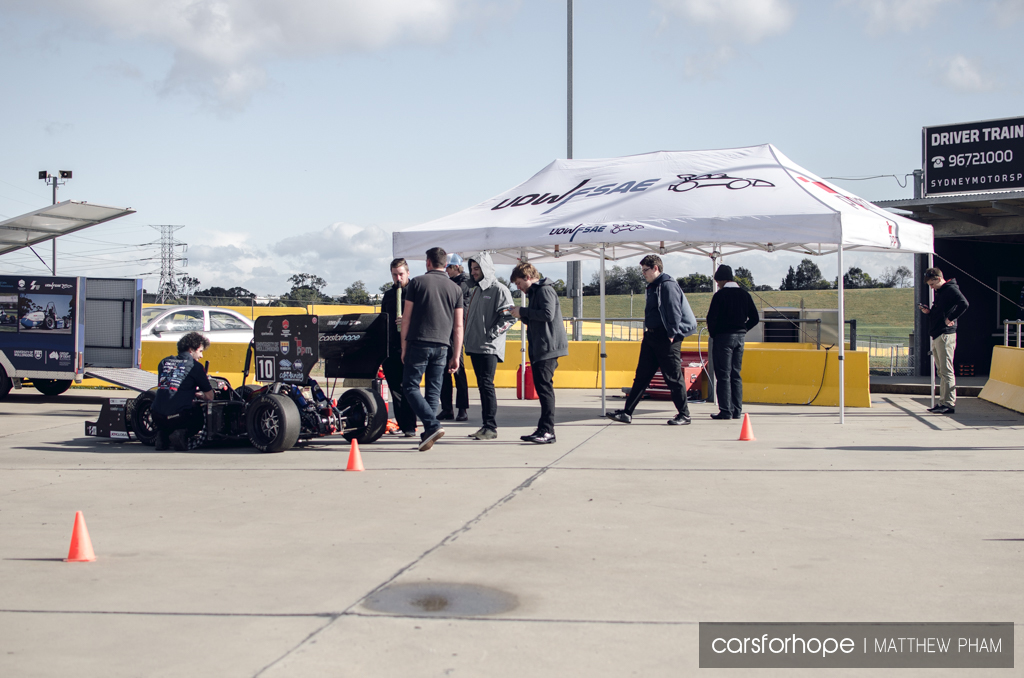 We teamed up with UOW FSAE a short while ago. They’re a dedicated group of university students from all disciplines including engineering, business, marketing and more, who together, work toward innovating a single-seater racing car and running a full-fledged racing team – all in their spare time at university. It’s a philosophy we share, and is akin to the way we are working toward building a positive community, where the barriers are broken and people are open about their mental health, through friendship, inclusion and an automotive passion. 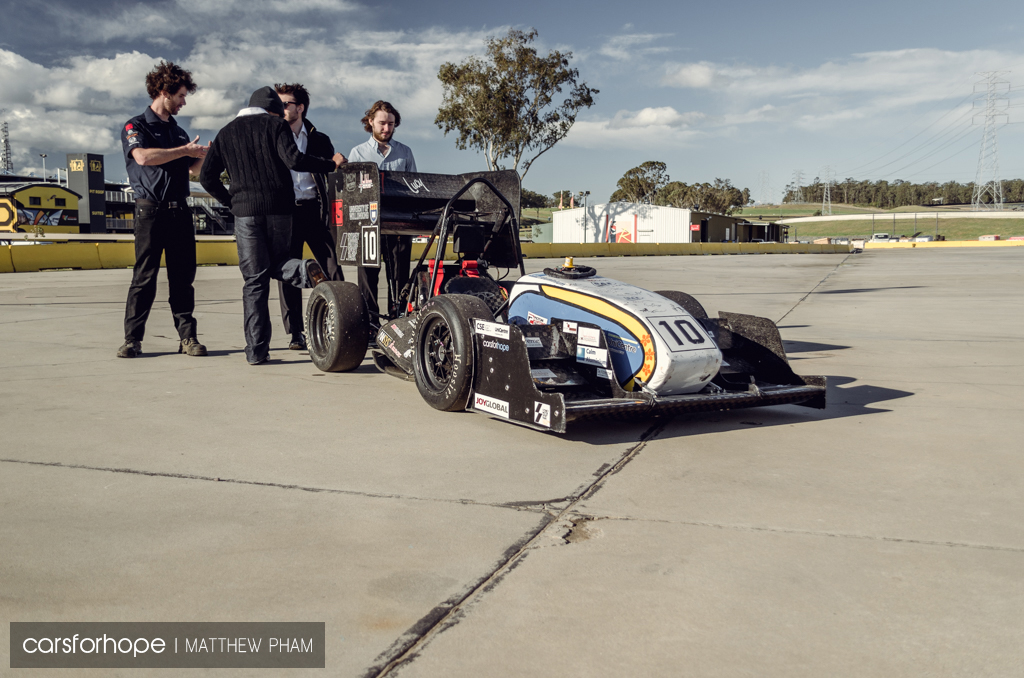 For the day it was myself, a self-proclaimed armchair racer, and Cars For Hope Founder, Berty, who has driven many a car (racing or otherwise) around the track at sweat-inducing speeds. We weren’t racing each other by any means but the competition was (somewhat) fierce between us hardcore motorsport enthusiasts. 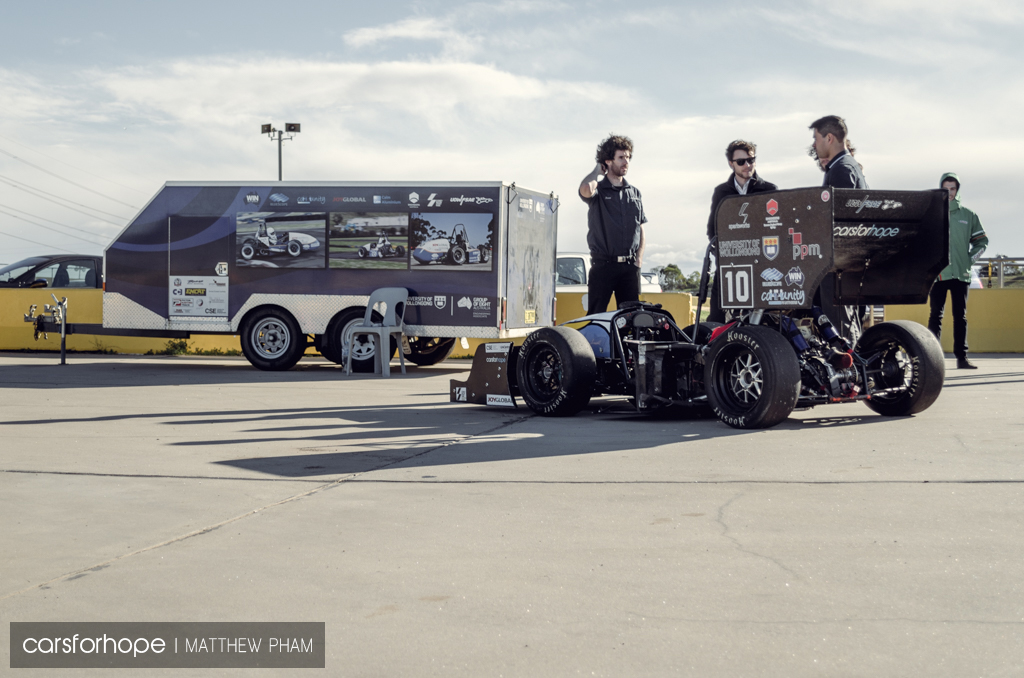 Anthony and Scott from the team gave us the run-down on the UOW FSAE and how they help bring the team to life. Anthony is the Business Director of the team, and manages all of the commercial and business aspects behind the scenes – everything from sponsorships to test drive days like today. Scott is part of the engineering squad behind the car itself, working on the suspension system – one of the most critical parts to the performance of any racing car – of the new car for the 2016 competition. And, of course there’s all of the people in the team who design and build the car, complete administrative duties, or simply help out around the workshop. 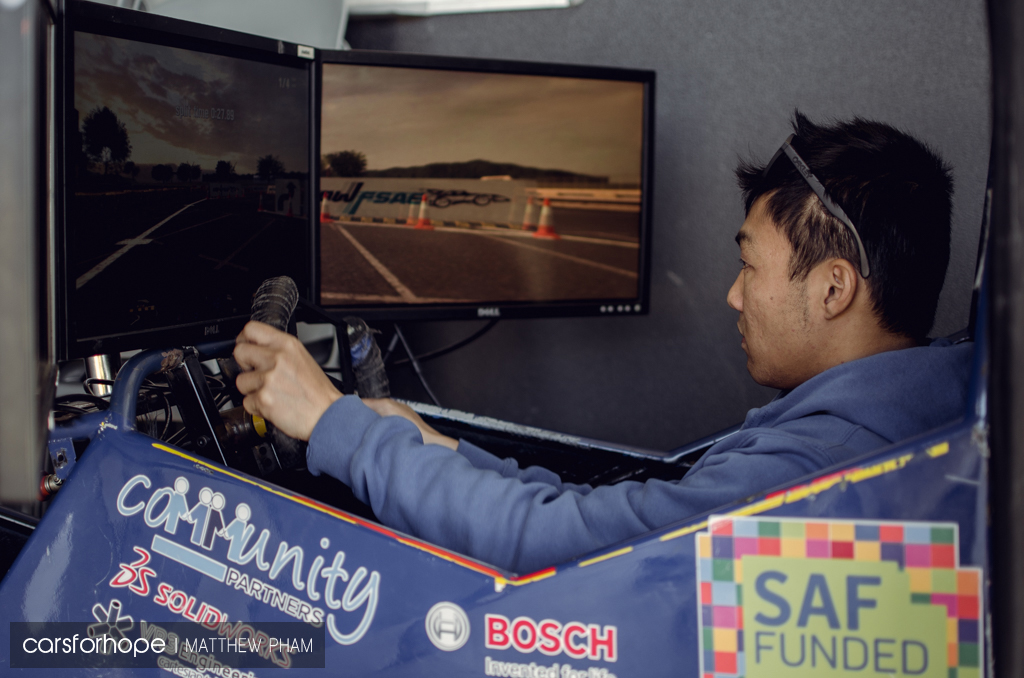 We helped get used to the feeling of being inside of an F-SAE car with some track time on their simulator first. UOW FSAE have developed it all themselves, using an old chassis as the base along with a force feedback steering wheel and pedal system, which worked great with the simulator software they also developed. I was going great on the simulator; that is, until I rolled the car – which I didn’t realise you could do. It wasn’t quite the impression I wanted to make when I was about to be given the keys to Lucy! 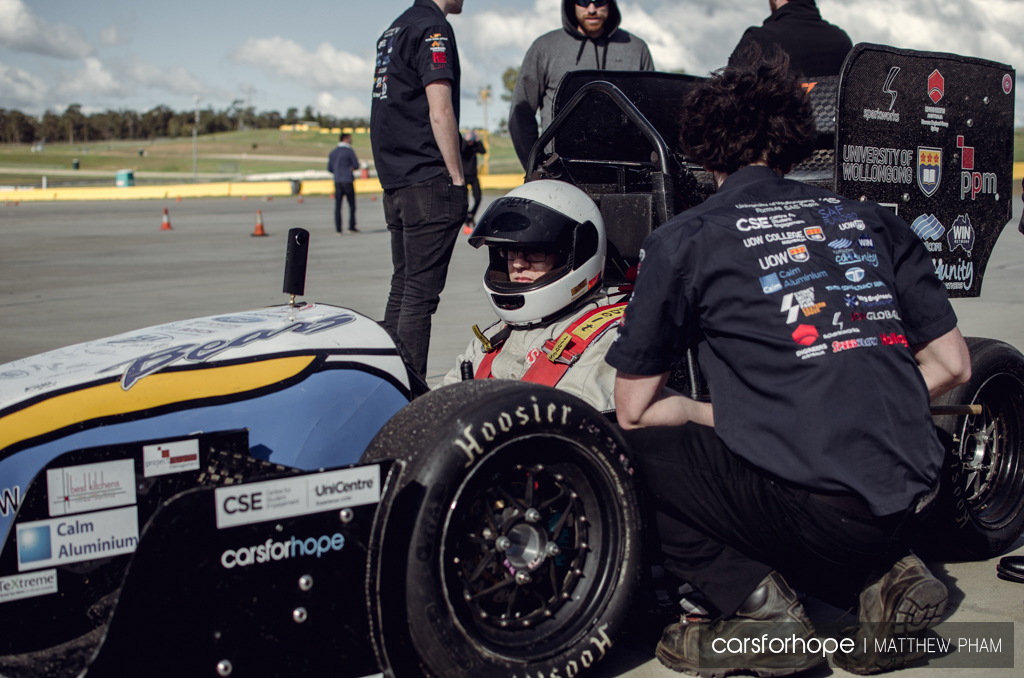 I was first to put Lucy through its paces, so it was time to suit up and don the helmet, which I haven’t done in a long time. As I was, another test driver was finishing up his run around the track. It was go-time! 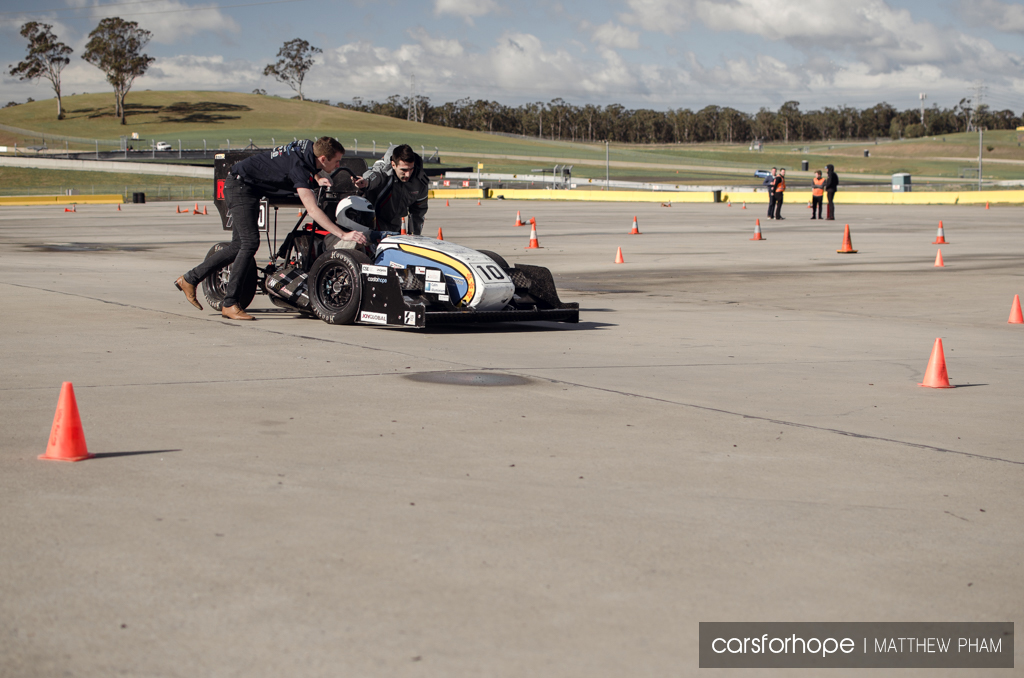 Being an international competition, all of the F-SAE cars around the world are sanctioned with a set of rules that define the limits to which the car can be designed to, including rules for both the electric (EV) and internal combustion engine (IC) classes. This helps keep the competition fair, but also keeps the ability to innovate wide open. 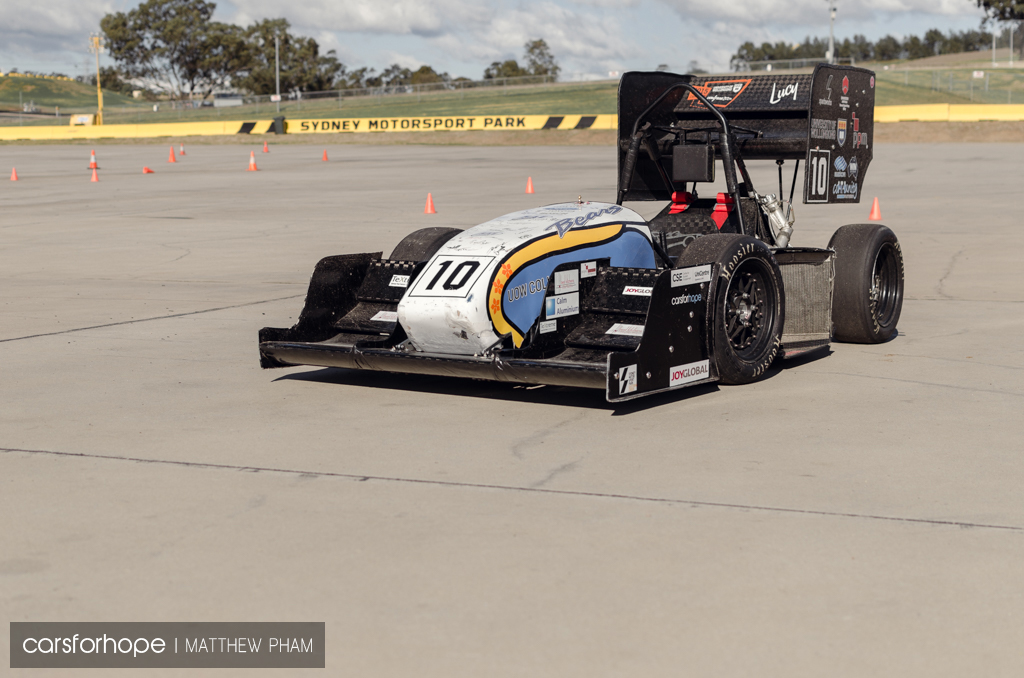 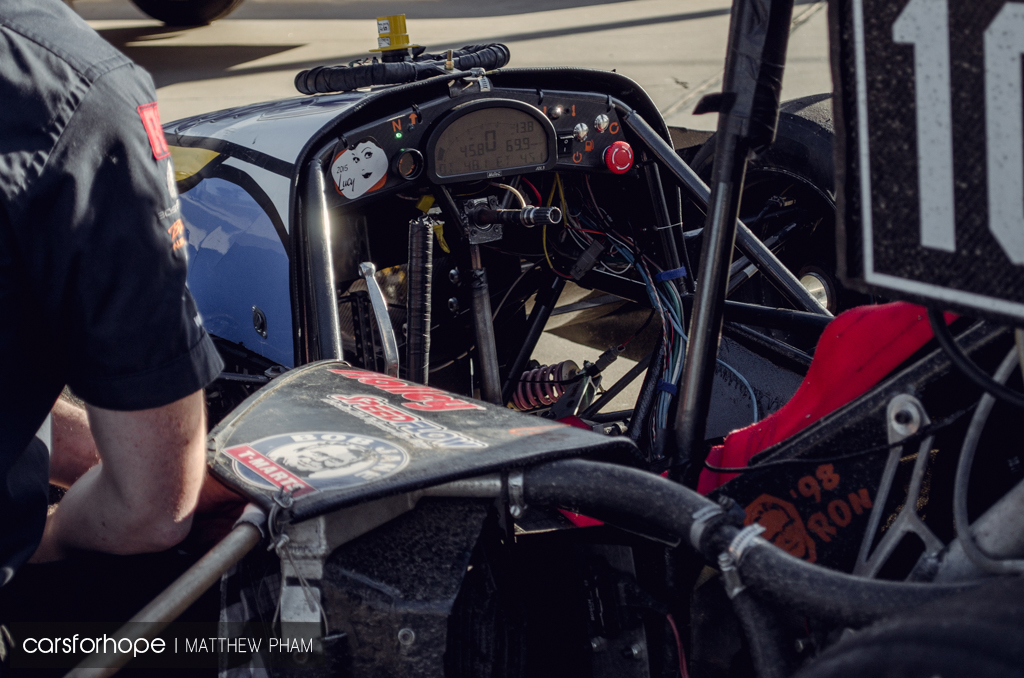 That’s all controlled by a MoTeC ECU with an accompanying Dash Data Logger system with a live data readout. 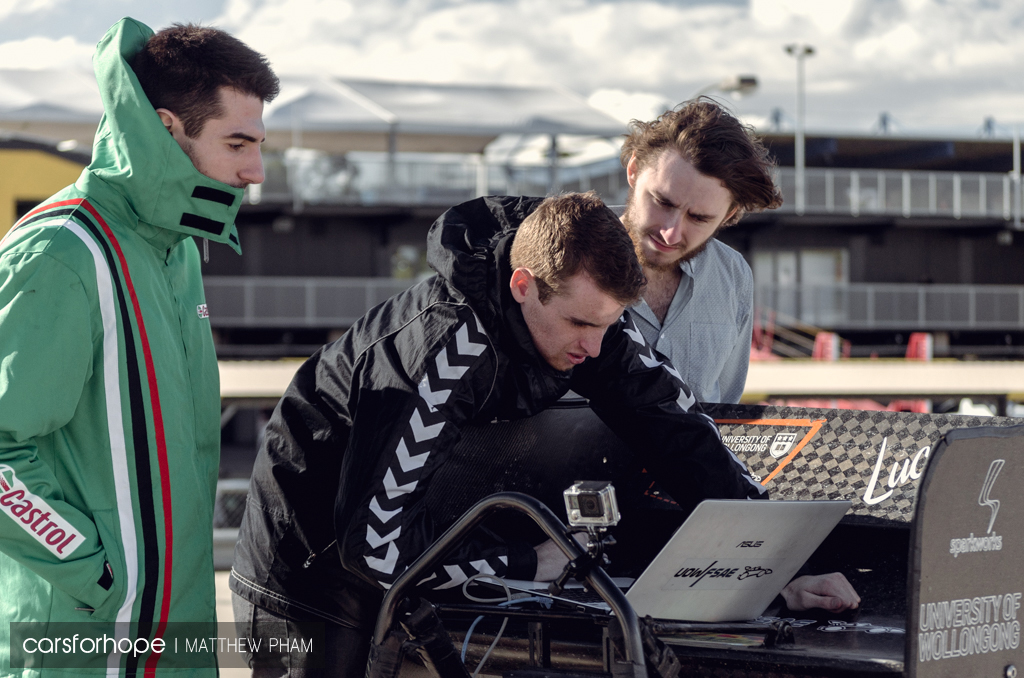 Helping to collect the all-important data when on track is an array of complex sensors to measure everything from tyre and brake temperatures to suspension travel, wheel slip angle, vehicle yaw and G-Forces. 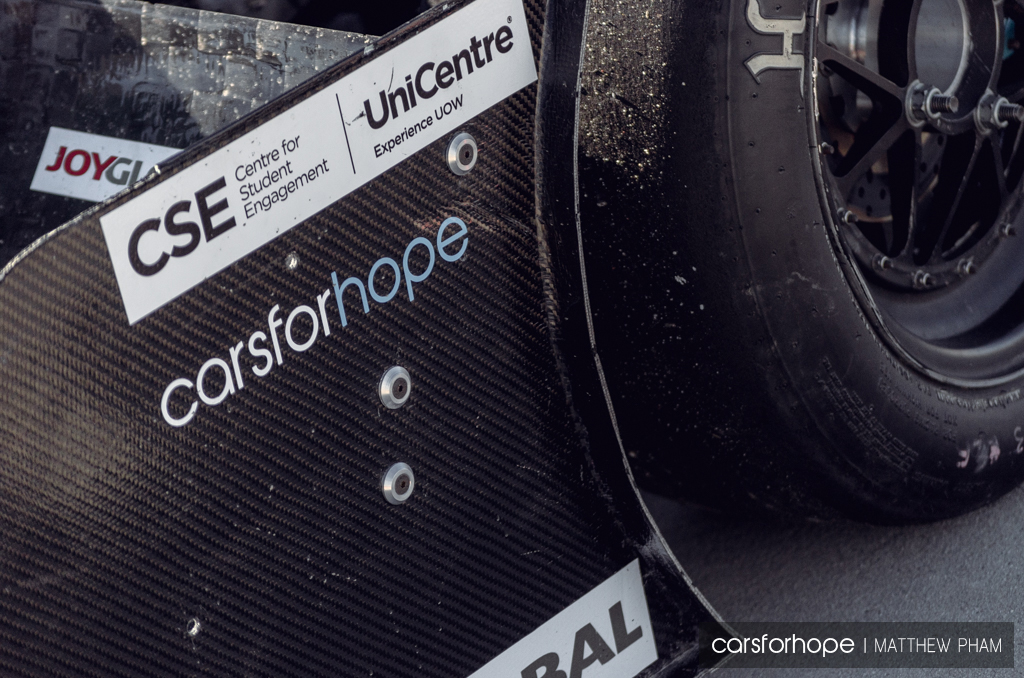 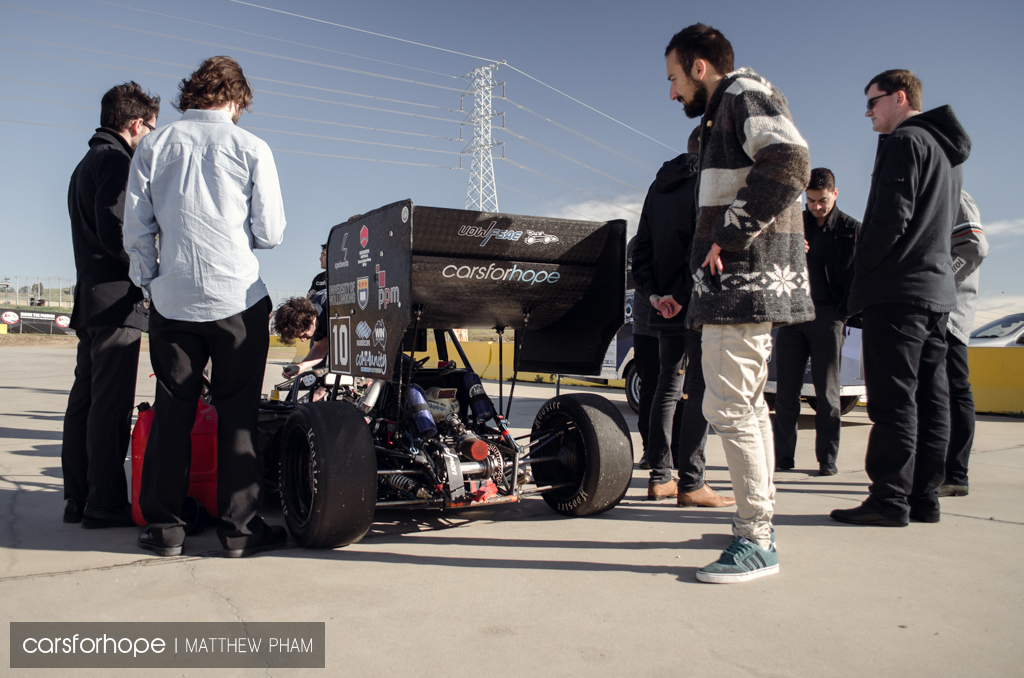 …and rear wings – which are hard to miss, plus are perfect places for Cars For Hope stickers – while the car rolls on in-house developed 13” wheels which are wrapped in specially-formulated slick tyres by Hoosier, measuring 7” wide. 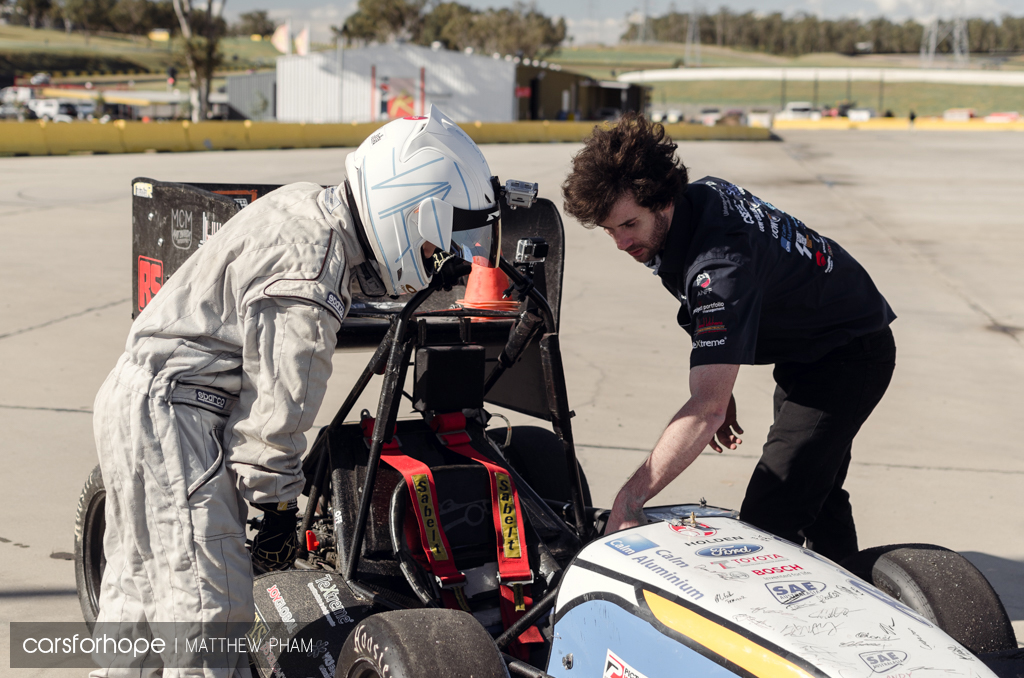 Scott took me through all the technical bits of taming Lucy, because let’s face it, while I have experience being a design engineer at my university’s F-SAE team, I knew nothing about how to drive the actual car. 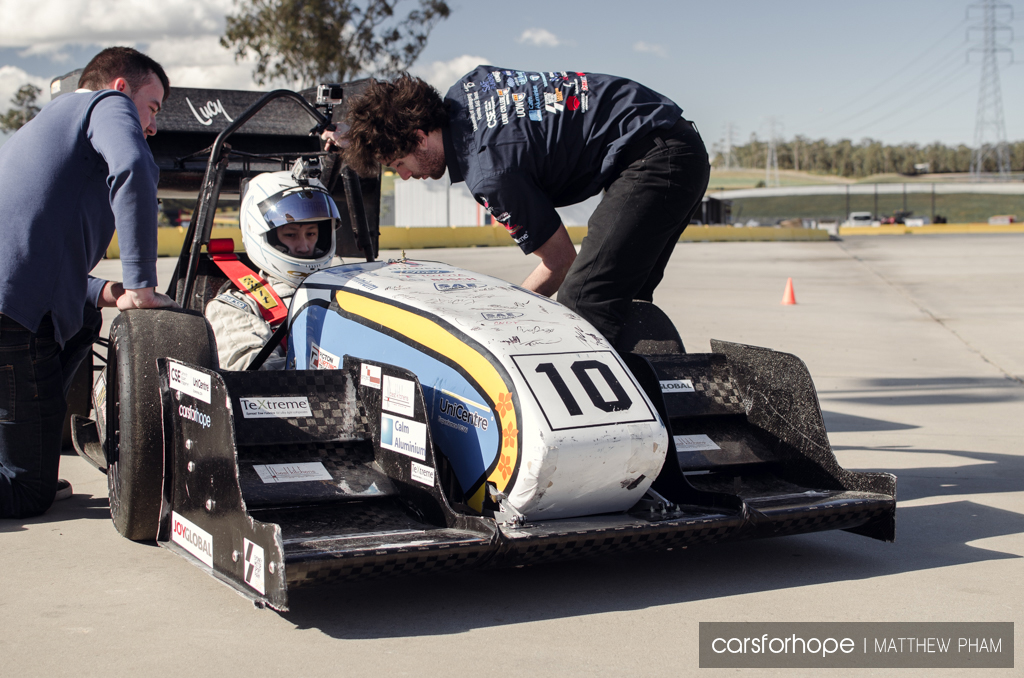 After, it was time to climb in and helped to get strapped in to the racing machine. It’s surprising how little manoeuvrability you have when you’re sitting in the racing seat with the helmet on, and that’s before you’re strapped in! 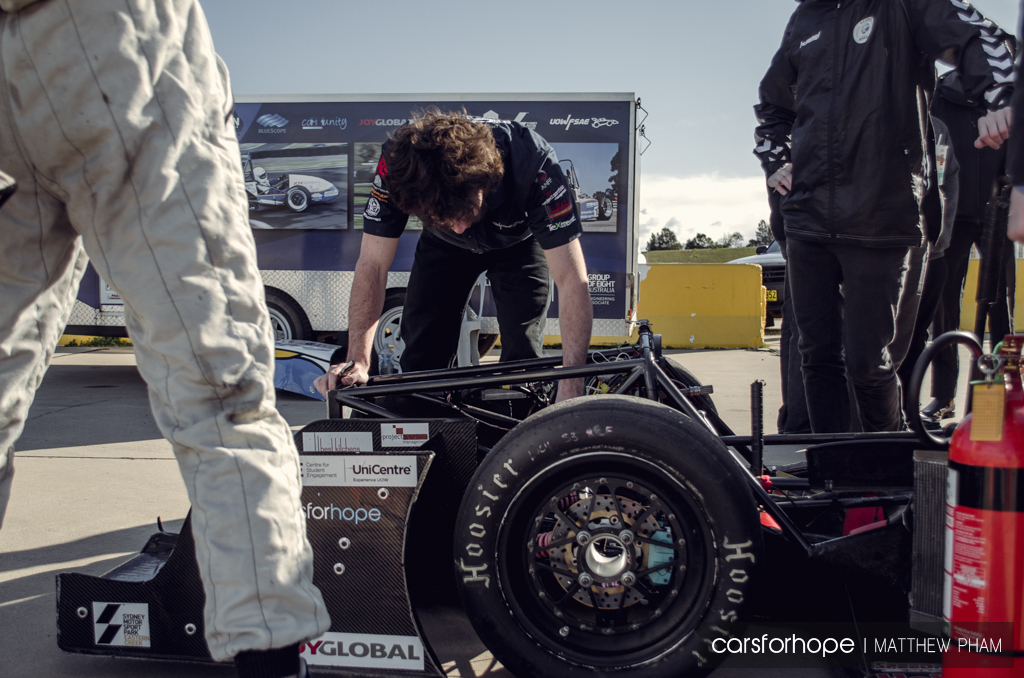 Part of what makes an F-SAE car’s design competitive is its adjustability. While Lucy was designed with a larger driver in mind, we had little problems fitting in thanks to an adjustable pedal box and a low front roll hoop height which meant I could easily sight the bounds of the car. 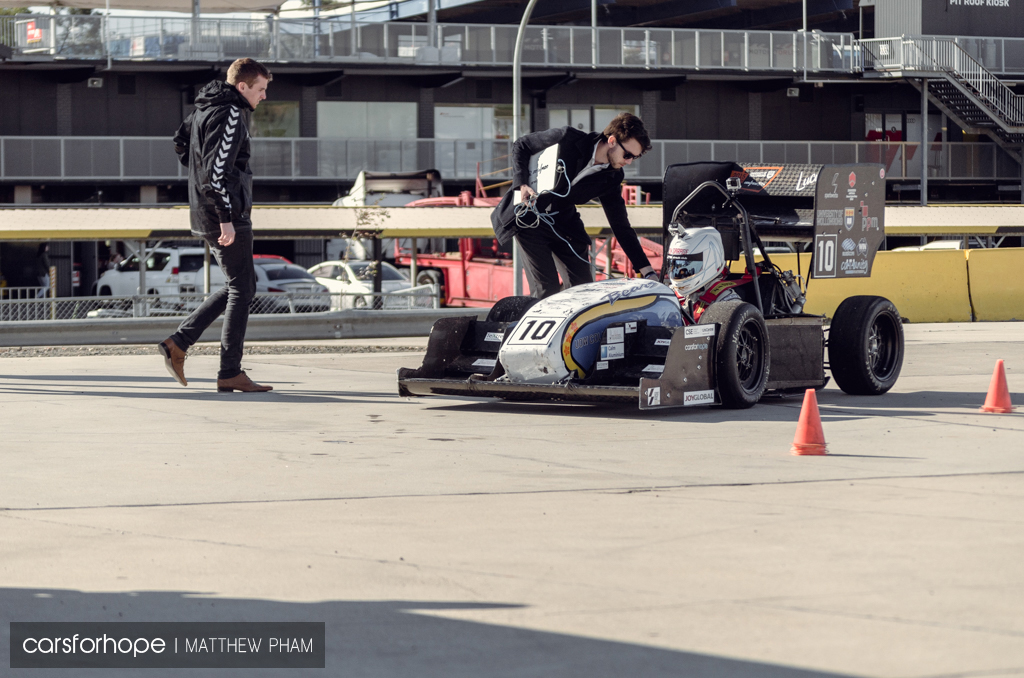 Sitting in the car and hearing it come to life as I flicked the fuel pump on and pressed the ignition switch was a heavenly feeling. Then the waiting game began for the engine to rise to its working temperature before I could set off. 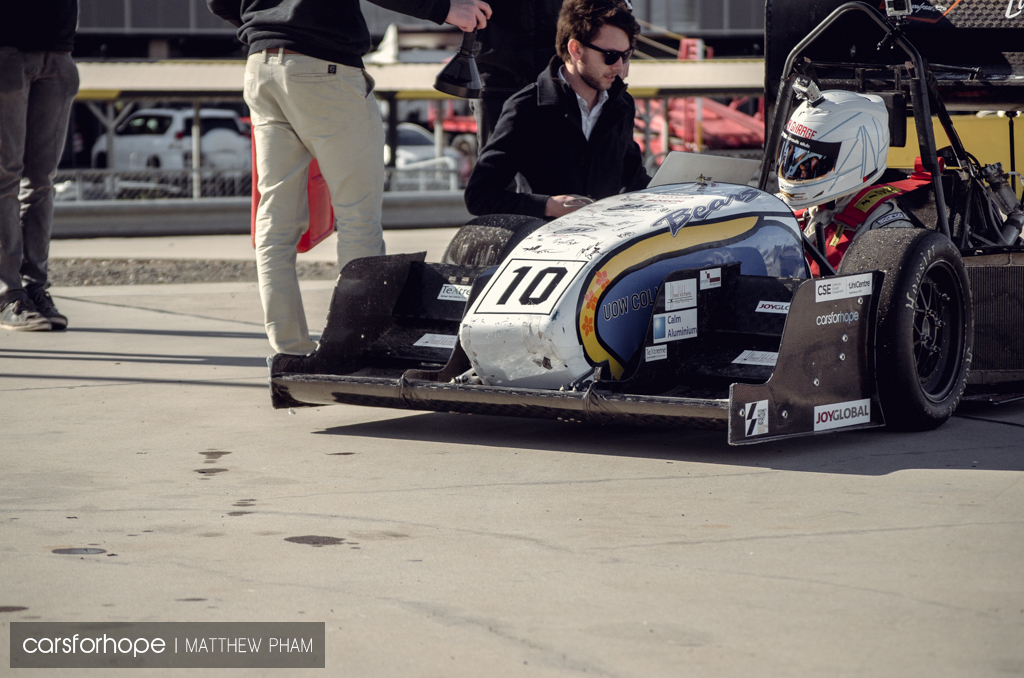 Driving an F-SAE car can be described as somewhere between riding a motorcycle and driving a car. Lucy’s pedal box has two pedals – an accelerator pedal on the right and the brake pedal on the left – while the clutch and gearbox are operated with the mechanical gear stick by the left hand. The clutch is activated with a lever much like a motorcycle and the gears are selected by pushing or pulling the gear stick. It’s pretty nifty. 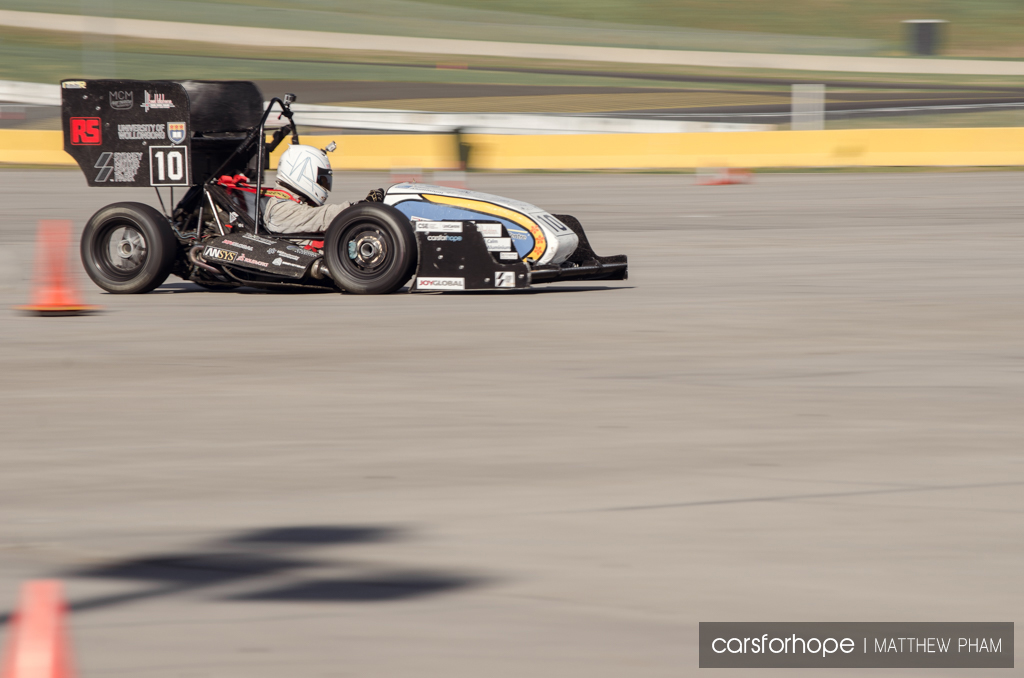 I headed out onto the skidpan and slowly navigated through the cones placed in a gymkhana-style layout, getting a feel for the way Lucy reacted on the concrete. The throttle was snappy and the brakes rock hard – there’s no brake booster so you’re pushing directly onto the brake master cylinders. At low speeds the steering was incredibly tight, with the mechanical rack-and-pinion setup in Lucy feeling no sympathy for my muscles (my core was getting the biggest workout of my life, as were my arms), but as the speed increased the wings did their work, and as the suspension loads increased the suspension did its work, making it feel like a whole new car. 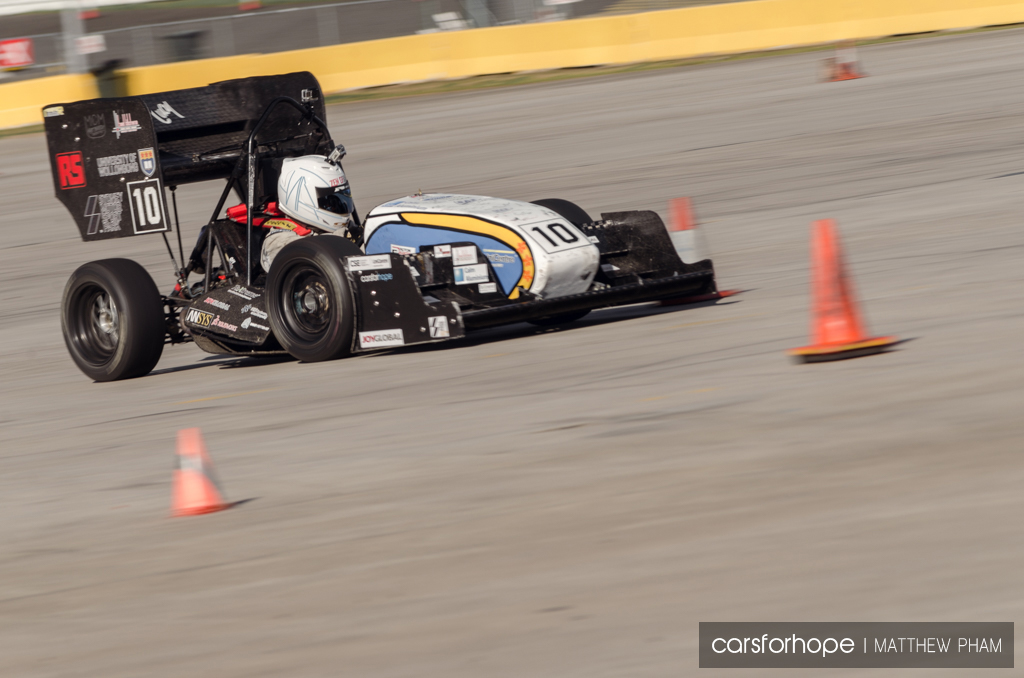 It took little effort for me to glide Lucy through the cones, and I thought the lateral grip from the Hoosiers (with the help of the wings) would never end. The Honda engine was perfectly matched to the chassis too: the power was manageable, and the suspension helped to let you know that you were exceeding the traction limit before it happened. Many slides were had between both Berty and I, although I admit I pushed too hard once and left two black liquorice straps on the concrete when the rear end came around to the front. But don’t get me wrong, it was hard work driving the car because after a few laps at race pace I was going in circles around the track hoping my body would recover just enough for me to keep going. 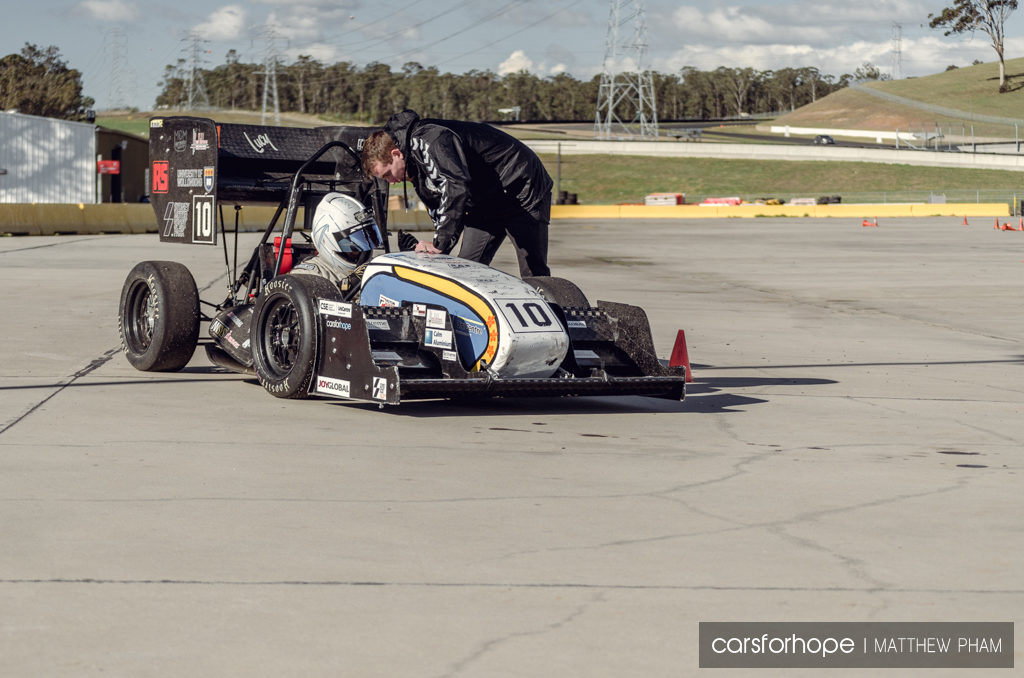 It was my body again telling me that enough was enough and that it was now Berty’s turn to see what he could do. He didn’t play around, throwing the car in and around the cones and taking Lucy to within an inch of its limit. It was great to watch a racer at work. And yes, before you ask, we’re both wearing the same racing gear which is why we look identical. 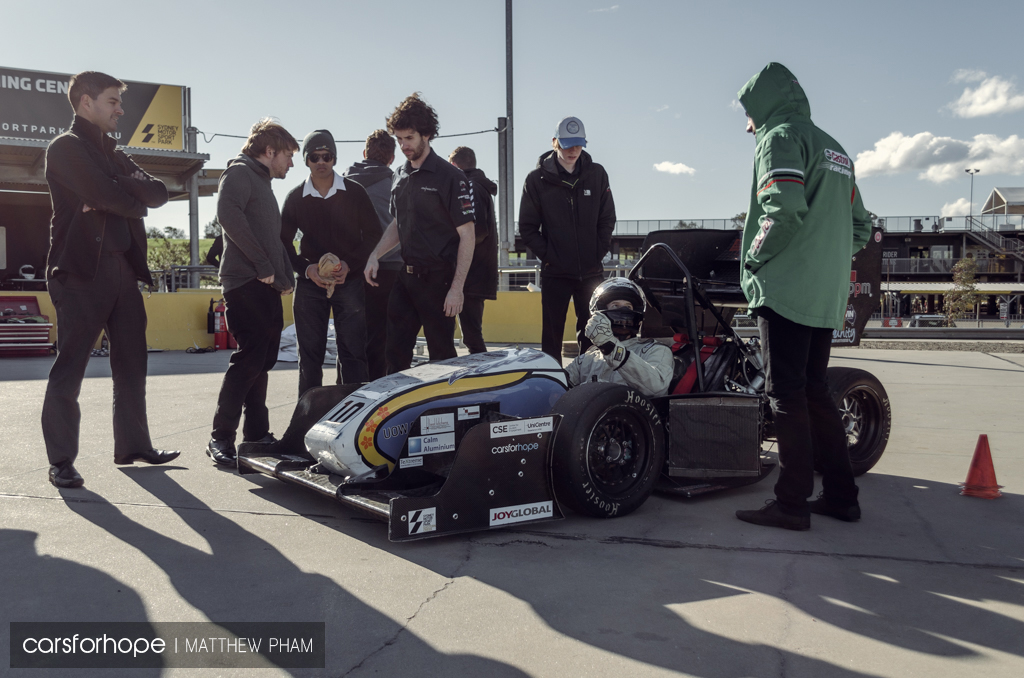 As we ended our drives, both in similar nods of approval and with cheesy grins plastered on our faces, it was almost surreal to know that Lucy is something a group of like-minded university students came to achieve through perseverance and with great camaraderie. And it is on that note that I encourage you to show your support for UOW FSAE by learning more about who they are, what they do and why they do it. They would love to hear from you! 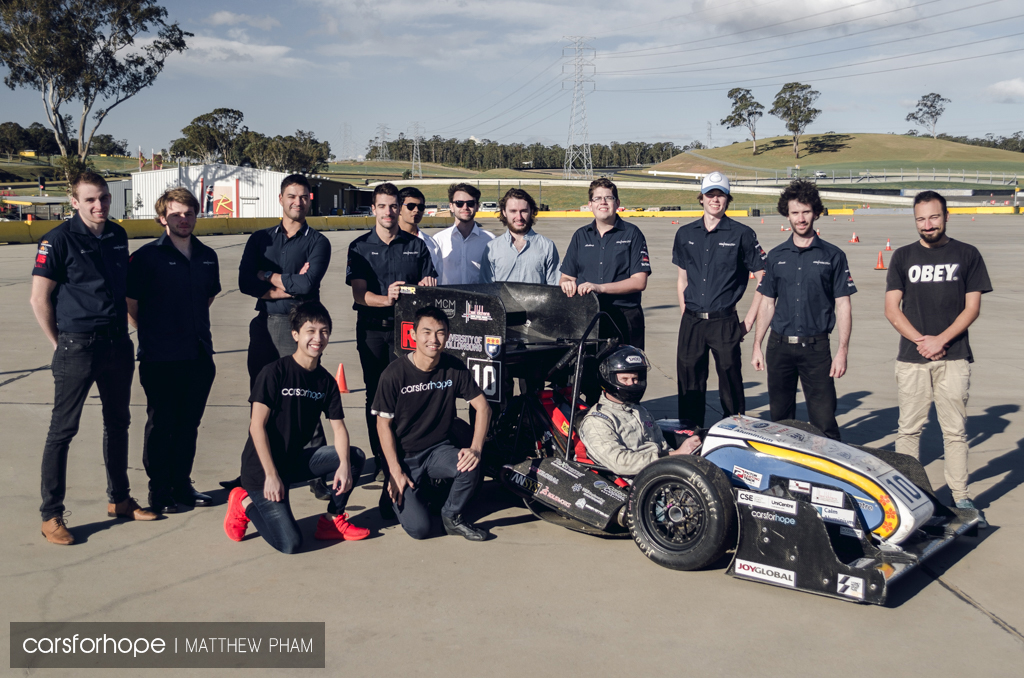 We’d like to extend a very special thanks to the whole UOW FSAE team, including Josh, Scott and Anthony for letting Cars For Hope be a part of an awesome day and and amazing team. We’ll see you again soon guys!