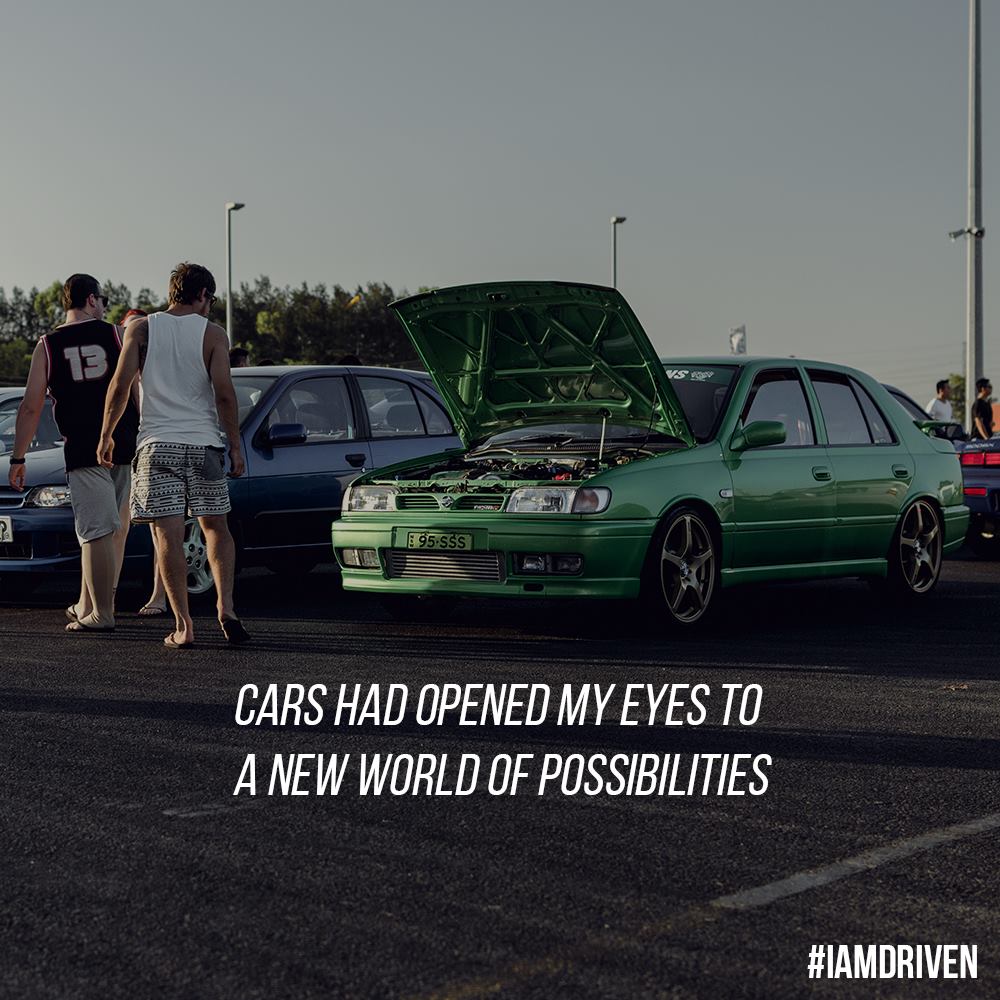 The following content may contain information about depression, anxiety, self-harm and/or other related material which may be triggering. Reader discretion is advised.

Growing up I always thought there was something wrong with me. I would always ask my parents if there was something wrong with me; if I was healthy. But I was always a happy kid. Art was my passion, and as I became a teenager cars were a part of my passions. Not so much the physical car, but the peace and comfort the long and therapeutic drives could offer. I began saving and customizing my cars, and I found some fellow gearheads who I would spend entire school nights and weekends working on our cars with. It didn’t matter what car you had or how fast, it was simply a shared love. I started to feel better as the years went on. I found myself. I had healthy relationships, and I was getting physically healthier as well. Cars had opened my eyes to a new world of possibilities.

One night in May 2010, I was driving myself home from the gym. I walked up to my parents front door and pulled my keys out of my pocket. As I reached out for the lock, my whole arm dropped. I couldn’t pick it up, the keys falling on the ground. I must have been in shock because I thought nothing of it. I opened the door with my other hand and stepped inside. Once inside I lay down on the couch. Probably less than a minute had passed before the door incident when my whole body felt like it was being squeezed, as if in a blood pressure cuff. I rolled on the floor yelling, but unable to talk. I slipped in and out of consciousness for what seemed like hours, but my parents would later tell me it was closer to 30 seconds.

When the EMTs arrived I had woken up for the most part. Still shaking, I could not remember my birthday. On the way to the hospital they told me I had suffered a seizure. I wouldn’t leave the hospital for a week. A CT scan revealed a mass in my brain, a lesion surrounded by edema that had brought on the seizure. My life as I knew it ended that week. They preformed brain surgery on me; my first of 3. The doctor said it was inoperable, and I’d be lucky to get 5 years.

I was unable to function after that. I had left my body. I’d have screaming and crying fits, but mostly silence. I sat in my room thinking about nothing and everything. It wasn’t long after the shock wore off that I began thinking about suicide. I lived close to a rail line, and I knew that’s how I wanted to do it, I just couldn’t summon the courage.

That September, I was introduced to a surgeon who said surgery was an option. I had the surgery later that month and it was successful, although it left me temporarily paralyzed on my right side. Recovery took a few months, but after that it was back to normal, back to work, and back to cars. But this time something was different. I was scared. I didn’t want to be alone. I didn’t want to leave my house, but most of all I didn’t want to drive. I wanted nothing to do with my long solo road trips, or going on rides with friends. This is when the panic attacks started. I battled panic and anxiety attacks for almost 3 years, thinking I could do it on my own. Then in February 2013, my doctor said the lesion was back. This time it would be surgery, followed by radiation and chemo.

After the surgery, I was inconsolable. The last 3 years of my life, just getting through the days, was now magnified. I was angry. I’d lash out at everyone. I would break things, walk for hours, screaming, crying and I felt like no one was there. Nothing mattered. I didn’t matter so why bother. I hit rock bottom, and hard. I lost a lot of weight and the desire to live.

My mom, seeing this took me to a psychologist. I was diagnosed with PTSD, severe depression and anxiety disorders. I refused to see my therapist at first. For the longest time, I fought it. I fought everyone but mostly myself in thinking I could go at it alone.

One day, I came to the realization that I couldn’t live like that. So, I had a decision to make. There were only 2 choices: train tracks or therapy. I am here today because I chose the latter. I never thought that talking would help at all, let alone this much. 3 years later I am on medication and sharing rather than fighting myself. I also found something through therapy, my passion, my love, my drive: cars. The things that had fascinated me as a kid, brought me though my teenage years, and at one point had been a source of fear and anger, were now reborn. I could drive, no longer afraid. I can now go to car shows, laugh and share stories.

I am still afraid. I still get anxiety attacks and nightmares. But my love of life is back. Please, if you feel like I did, talk. Talk to someone. I know how dark it can be, but there is a way. Thank you for reading my story.

If you or someone you know is struggling with depression, anxiety, self-harm or addiction, please reach out. Call 13 11 14 for Lifeline’s 24hr Telephone Crisis Support or contact a mental health professional. If you are looking for other mental health resources, browse our Find Help page.

Stories written by members of the Cars For Hope community. Find out how you can submit your story here: http://carsforhope.com.au/stories