At Cars For Hope we believe that community is everything. Sharing stories, giving hope and letting people know that they matter is a massive part of our cause. At World Time Attack Challenge 2014, we teamed up with competing racing teams to raise awareness about mental health. By helping us spread our message, these teams demonstrated their desire to impact the lives of many and showed their support for the work we do at Cars For Hope. 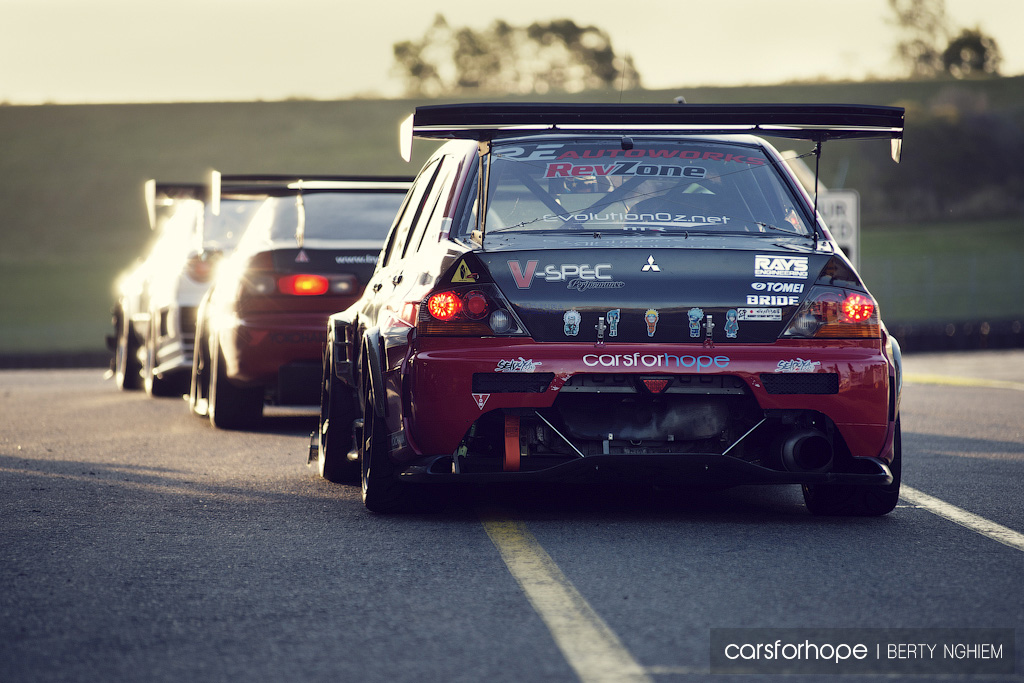 The Carbon Plus Evo waiting at Sydney Motorsport Park pit lane exit, as Tarzan Yamada prepares to lay down a quick lap time with the conditions beginning to come together. 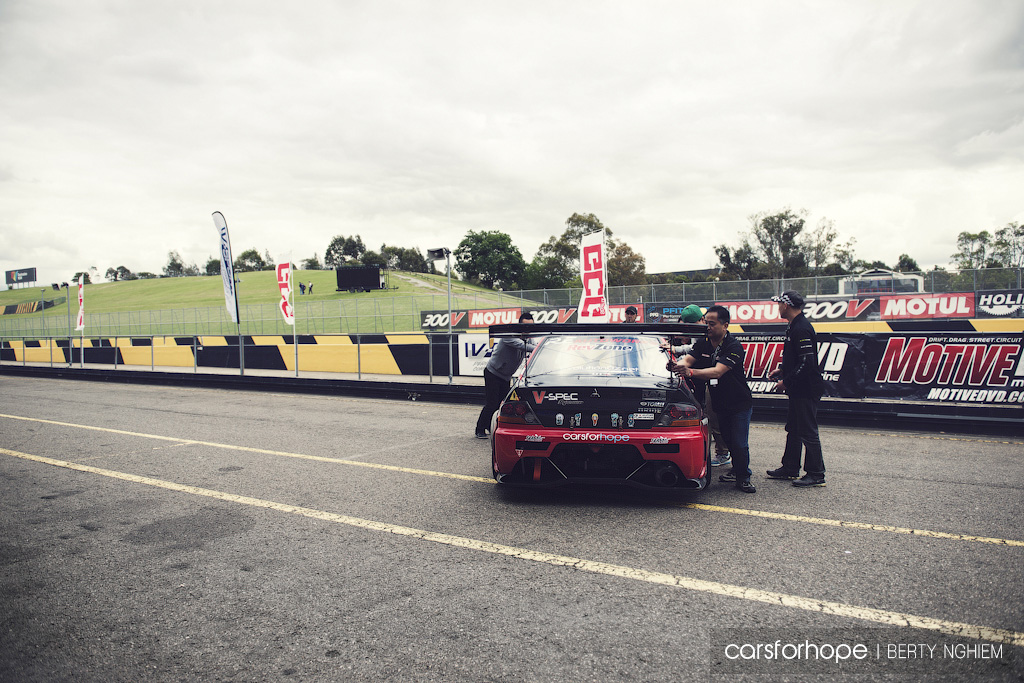 Our stickers are a medium for delivering our message, and it means a great deal to us. We’ve been fortunate to have many cars support Cars For Hope by donning our stickers, from street, circuit, rally to time attack cars.

JDMYard’s new EG Time Attack Car waiting to make their debut. This brand new chassis was only revealed a couple of days before the event! 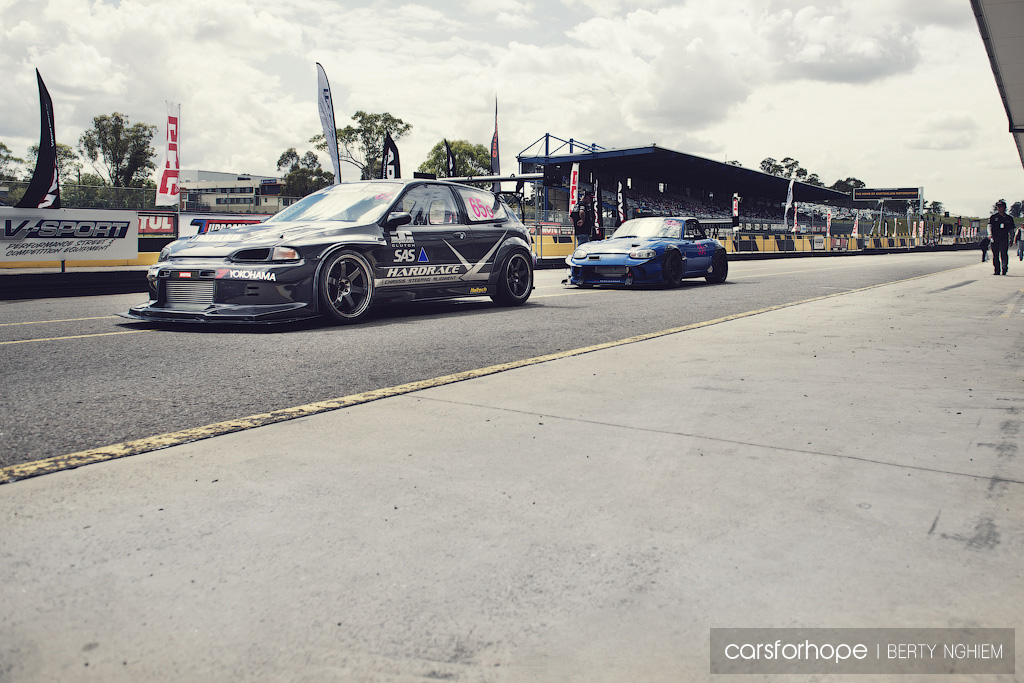 With thousands of people in Australia and globally also wearing Cars For Hope stickers on their street cars, it’s a big step towards educating the public and destigmatising mental illness. Our sticker symbolises our efforts and means a great deal to us. You can read about what it means to us here. 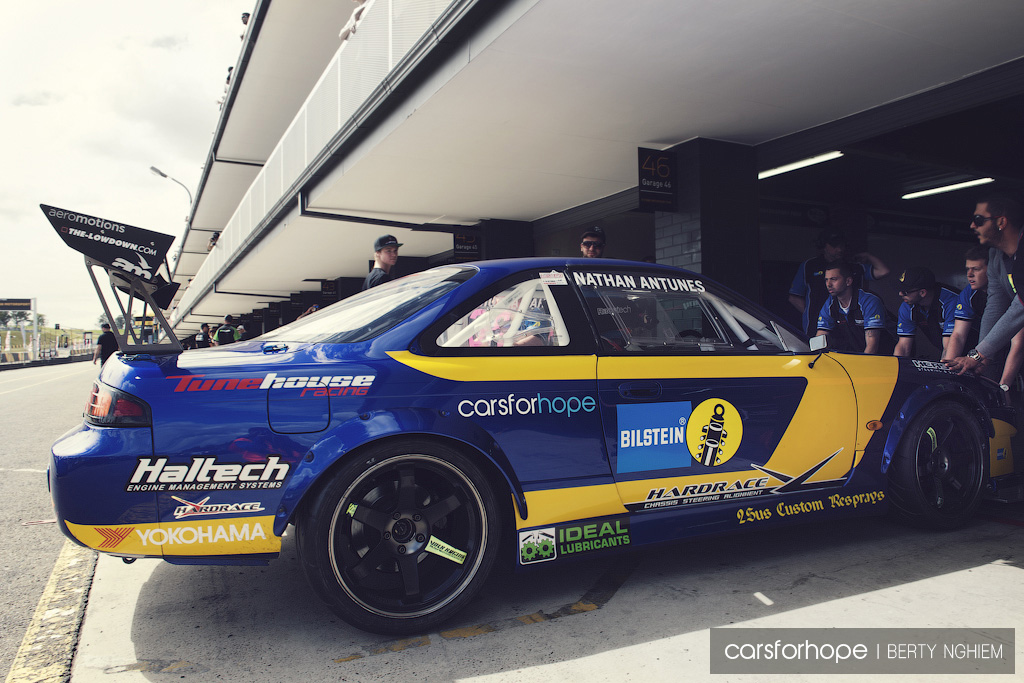 One of the most popular cars of the event, the Heasman Steering S14 driven by Nathan Antunes. This car has garnered a huge following being featured on The-LOWDOWN last year. 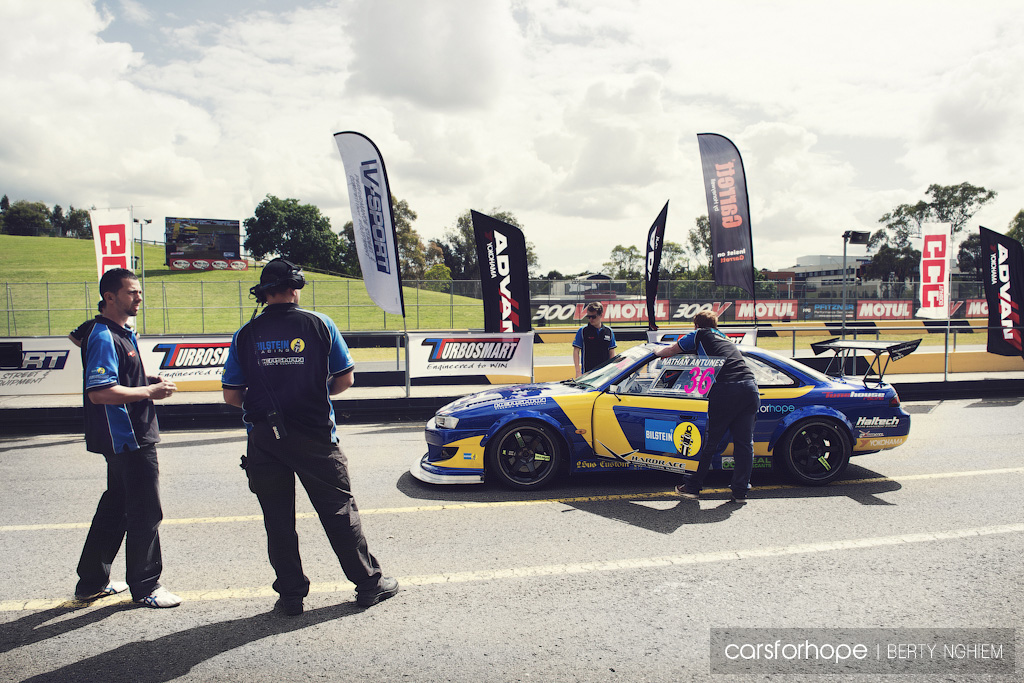 Motorsport is an exciting spectacle, and we aim to add another dimension to what we know and love through Cars For Hope. Thousands of spectators came in to World Time Attack Challenge from across Australia and international borders. The event was also live streamed to hundreds of thousands world wide, so it was a great opportunity for us and these racing teams to show their support for the spectators – to remind them that they aren’t alone and that they matter. 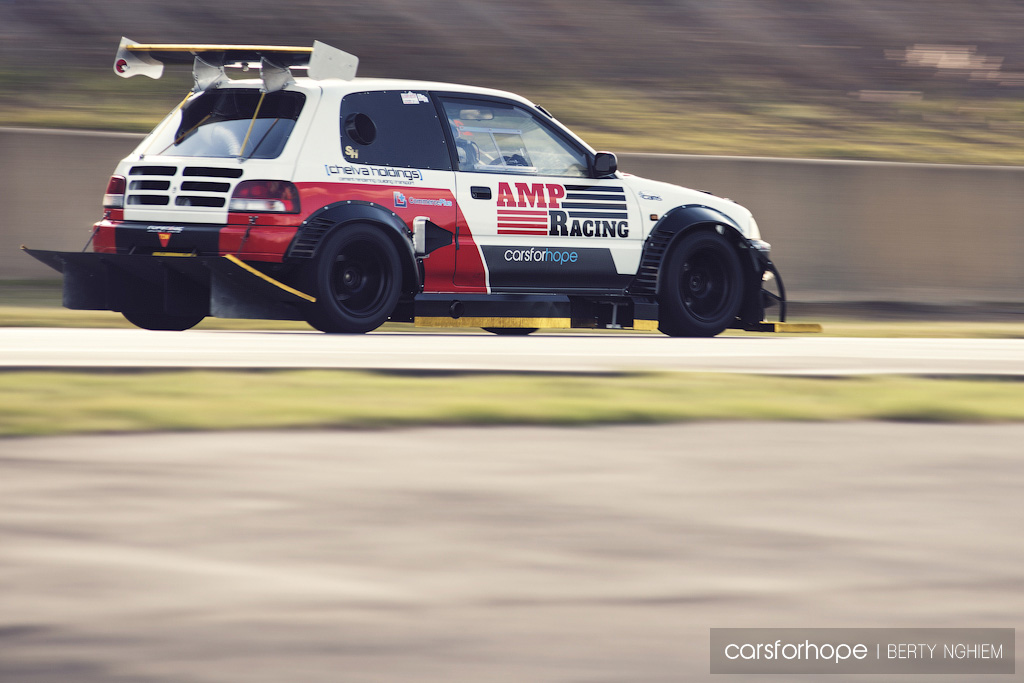 One of our favourite cars from the weekend, the AMP Racing Charade driven by Miguel Pires competing in the Pro Am class. We can’t imagine how crazy this car must be to drive. 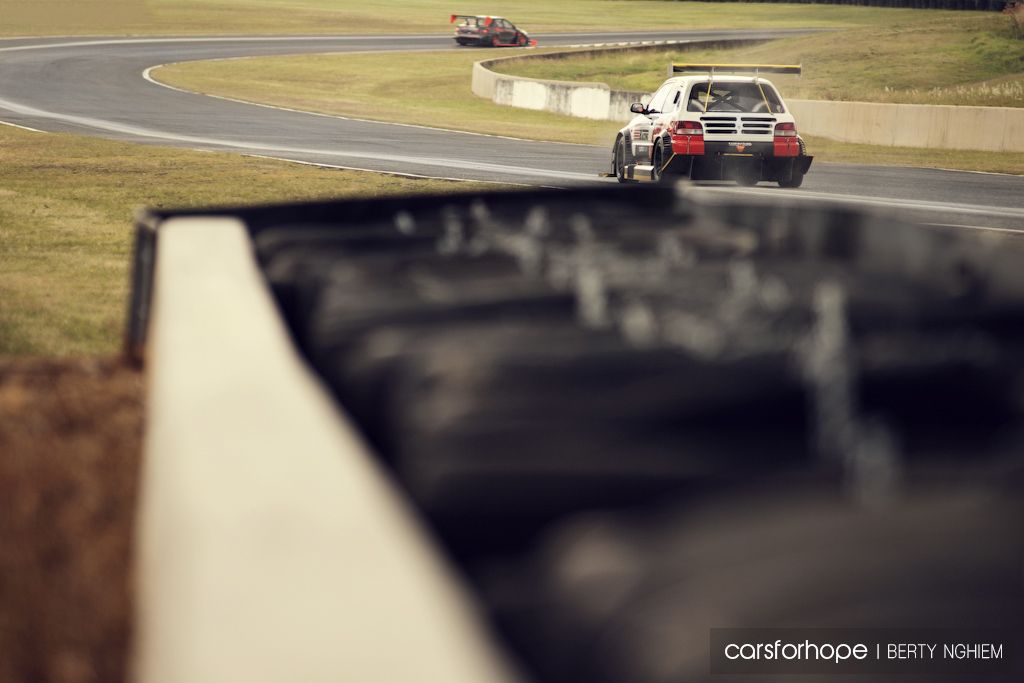 These racing teams play an integral role in the Cars For Hope movement and we hope to continue an ongoing relationship together to go a long way in fighting for mental health awareness and creating change.

The BPG Motorsport RX7 driven by Hayley Swanson and Adam Burgess. Both drivers managed to set respectable lap times despite the car being set up for tarmac rally events. 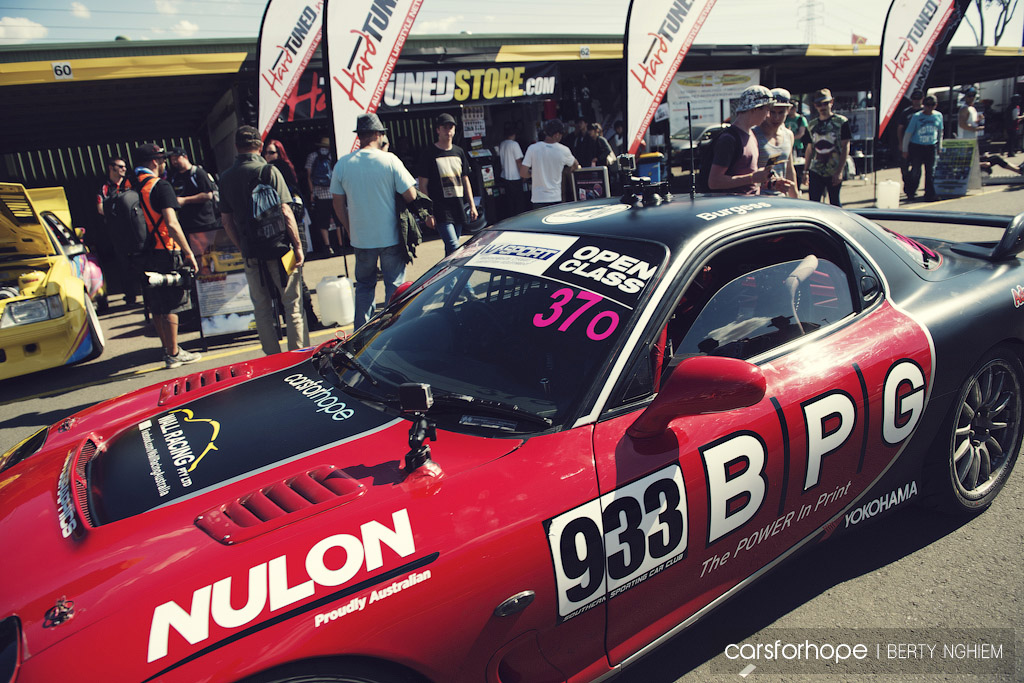 We’d like to give a special thanks to all the teams who chose to team up with us this year. Thank you for joining us in raising awareness about mental health and reminding those around us that they matter. We’d also like to invite more teams to join us in reducing the stigma associated with mental health and create a world where people feel confident about taking action when struggling with mental health problems. As cars form the basis for our efforts, we want to create close relationships with professional racing teams who wholeheartedly support what we do.

From all of us here at Cars For Hope, thank you for supporting us. If your racing team shares the same values as the Cars For Hope movement please get in touch with us, we would love to have you on board. We’ll see you again at next year’s World Time Attack Challenge!

Rollie Parame is the treasurer for Cars For Hope. He likes motorsport, rooftops and technology. After owning a B16 EG, NA MX5, he now drives an EK Civic. When he's not busy pursuing his degree in Business and Computer Science at UQ, Rollie dedicates his spare time to raising awareness towards mental health.