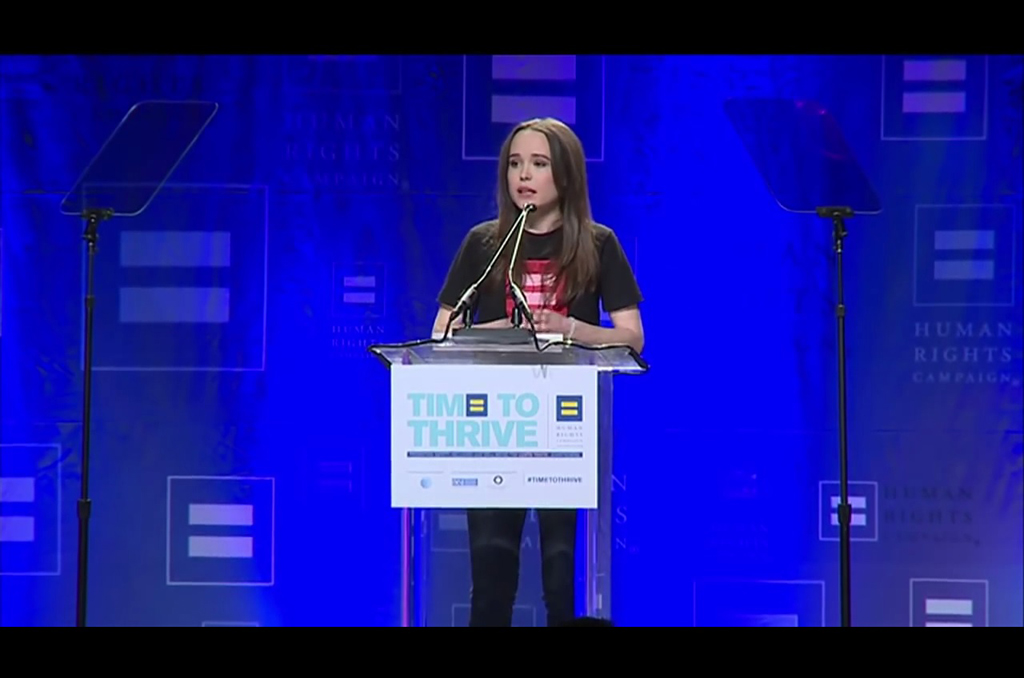 Canadian actress Ellen Page, who starred in the hit movie Juno in 2007, announced that she was gay at the Human Rights THRIVE conference in Las Vegas, an event that supports LBGTQ youths.

“I’m here today because I am gay,” she said.

“…And because I can make a difference.

“Regardless, for me, I feel a personal obligation and a social responsibility,” she added.

She further spoke of her personal story of the pressures of life in the spotlight and revealed she had struggled with her mental turmoil since 2007 when she was suddenly thrust into the Hollywood limelight.

“I suffered for years because I was scared to be out. My spirit suffered, my mental health suffered and my relationships suffered. And I’m standing here today, with all of you, on the other side of all that pain.”

“There are too many kids out there suffering from bullying, rejection, or simply being mistreated because of who they are. Too many dropouts. Too much abuse. Too many homeless. Too many suicides,” she continued.

In her speech, Page broke the barriers surrounding not only Hollywood actors and actresses, but everyone and the standardised mould society crafts for individuals.

“Standards of beauty. Of a good life. Of success. Standards that, I hate to admit, have affected me. You have ideas planted in your head, thoughts you never had before, that tell you how you have to act, how you have to dress and who you have to be. I have been trying to push back, to be authentic, to follow my heart, but it can be hard.”

She said she was inspired to speak out after American football player Michael Sam revealed that he was gay earlier in the week, describing him as a “hero” for his bravery.

Page’s Time to Thrive speech encapsulates one of the messages we spread; of people helping other people.

Whether they be small, individual acts or on a larger scale like Ellen’s, love is the greatest gift to give and to receive and love gives us hope that the stigmas, the stereotypes and the pain that we live through can change and change for good.